Let us Help you find your next vehicle!

You don't have any saved vehicles!

Look for this link on your favorites:

Once you've saved some vehicles, you can view them here at any time. 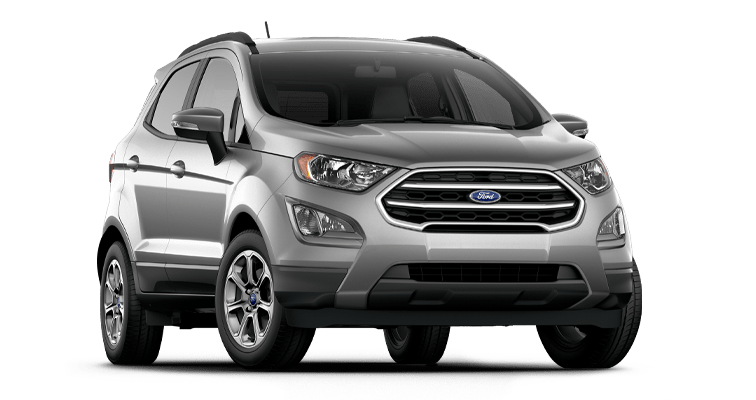 Confidence All the Way There

All About The 2021 EcoSport

Although this compact SUV entered an already crowded market a few years ago, the Ford EcoSport has managed to distinguish itself with above-average cargo capacity, a high level of maneuverability, and a generous list of standard tech features. The 2021 model year is the most recent iteration, and it presents the EcoSport in the following trim levels:

S: With its 123-horsepower 1.0-liter three-cylinder engine—which is tied to a six-speed automatic transmission—the base-level S is great on gas, with fuel economy numbers estimated at 27 mpg in the city and 29 mpg on the highway. It also helps that the turbo-three has auto stop-start technology, which means the engine turns off when you are at a complete stop and turns back on when you resume driving, thereby avoiding unnecessary consumption of fuel. Although front-wheel drive is standard, you have the option of getting an all-wheel-drive system for better performance on slippery surfaces. A five-seater, the vehicle provides more passenger volume than most other entries in its class, at 91.1 cubic feet. Infotainment on the SUV is provided by the SYNC multimedia system, which combines the following:

Driver assistance on the 2021 EcoSport SE comes from some of the features that comprise Ford’s Co-Pilot360 suite. Such features consist of the following:

SE: The SE trim level represents a big leap for the EcoSport. The cloth seat material is upgraded, heating capability is added on the front seats, and the urethane on the wheel is replaced by leather wrapping. For infotainment, an 8-inch touchscreen replaces the 4.2-inch display, and the SYNC system is boosted by a SiriusXM Radio trial subscription and smartphone integration via Android Auto and Apple CarPlay. The manual climate controls are replaced by automatic ones for increased convenience, a push button replaces the ignition switch, and remote keyless entry is upgraded with a proximity keyless entry system for much easier access. For driver assistance, front parking sensors join the rear ones to boost the rearview camera’s functionality, and a blind-spot information system with rear cross-traffic alert is introduced to reduce blind spots and watch out for the path behind you when backing out of somewhere.

SES: As the top-of-the-line trim, the SES is the only EcoSport with a larger, 2.0-liter four-cylinder engine, which outputs 166 horsepower. That’s an increase of 43 horsepower from the turbo-three; consequently, the SES is the choice for you if you want the best acceleration on the EcoSport. In addition, the SES is the only model with steering-wheel heating. Despite all these unique features, note that the SES reverts to a seven-speaker setup.

Ready to try out the 2021 EcoSport for yourself? At our Greenway Florida location in the Orlando area, we strive to provide outstanding customer service along with our substantial inventory of vehicles. You can test-drive this compact SUV at our Greenway Florida dealership and meet with one of our Orlando area specialists today. Call us to set up an appointment for this Ford SUV.

EPA-estimated city/hwy mpg for the S, SE, and Titanium models. See fueleconomy.gov for fuel economy of other engine/transmission combinations. Actual mileage will vary.

Although every reasonable effort has been made to ensure the accuracy of the information contained on this site, absolute accuracy cannot be guaranteed. This site, and all information and materials appearing on it, are presented to the user “as is” without warranty of any kind, either express or implied. All vehicles are subject to prior sale. Price does not include applicable tax, title, and license charges. ‡Vehicles shown at different locations are not currently in our inventory (Not in Stock) but can be made available to you at our location within a reasonable date from the time of your request, not to exceed one week.

You don't have any saved vehicles!

Look for this link on your favorites:

Once you've saved some vehicles, you can view them here at any time.